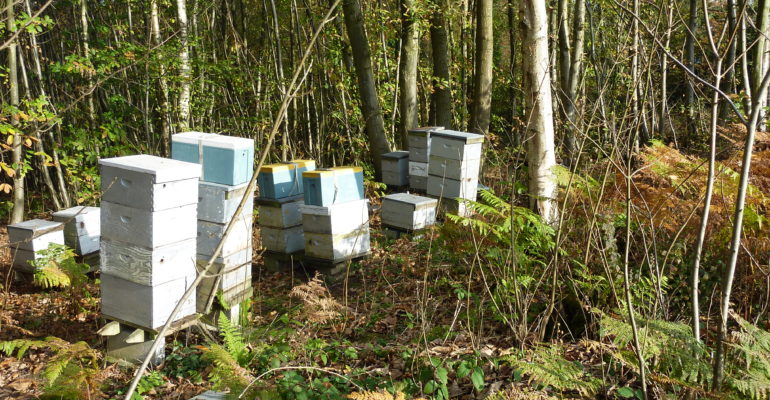 Controlling varroa need not mean using the chemicals you would rather not be pumping into your hives or all over your bees. We know that fluvalinate and flumethrin are mostly no longer effective. They also have the potential to build up in the wax, especially if you do not change the combs as often as you should. We have found that oxalic and formic acids are either nasty to use or reduce the life of queens. At Kemble Bees we have developed a way of keeping varroa down to levels which are not economically damaging whilst controlling swarming and enforcing comb renewal.  It can also be used as a way of requeening coupled with nuc production.

GIVE US A BREAK, said the bees

Consider the hive as a varroa incubator.   In a hive with few varroa mites in spring, the queen cranks up the brood production and the varroa follow up closely behind.   During the spring and early summer the beekeeper endeavours to prevent swarming. A young vigorous queen can often outstrip the mites in egg production but after the main honey flow the queen slows down brood production which  results in more mites (as the brood hatches) competing for fewer cells of brood to reproduce in. Shortly after this varroa becomes a problem and the hive is in a downward spiral.

In one forest in the USA there are a large number of feral colonies which appear to have reached a balance with varroa. It has been suggested that the bees have nudged the mites into being somehow less aggressive or virulent, but when the bees were removed to hives they fared no better than control hives.

This suggests that it is the management of the bees that is the problem.It occurs to us that the feral bees swarm, probably most of them do so every year, which gives the colony a break in brood rearing. Getting a queen mated from a large colony usually  takes much longer than from a nucleus colony.

There ought to be a beekeeping law which states “the speed at which a virgin queen gets mated is in inverse proportion to the size of the colony”. For controlling varroa, the longer it takes the more effective it is in reducing the varroa problem.

We are not  suggesting you just let the bees swarm when they see fit but to choose the timing of the swarming and to control it rather than prevent it.  The ideal time for us, in southern England, is just before the main honey flow which, in recent years, has been starting around the third week of June. Swarm control before this period is largely by way of giving lots of brood space. We use only deep frames and are happy to let them have the run of three deep Langstroth brood boxes, if they need them.  If the colony shows any inclination to swarm it is easily detected by examining the bottoms of the combs of the second and third boxes. If there are any swarm cells in the colony some of them (not all, by any means) will be seen there. Removing some brood will normally be all that is required to prevent swarming.

Around the middle to the end of June we remove all the brood from the colonies leaving only a comb of unsealed brood behind to anchor the queen. Enough young bees are left on the brood to keep it warm and to feed the unsealed brood. These boxes of brood are stacked up on floors in a corner of the yard, four or five boxes high, as convenient. The parent hive has the queen and all the flying bees and some of the nurse bees. It has a single brood box mostly of foundation with the one unsealed brood comb and combs of honey and pollen on the outsides. On this is a queen excluder and above that any honey supers that were part of the original hive. The stacks of brood are left for ten days when all queen cells are then destroyed. The stacks are then broken down into nuclei (usually one box of sealed brood with some honey and adhering bees). The following day each nuc is given a ripe (ten day old) queen cell. These nucs can be repositioned in the same yard because queen-less bees readily mark their new position in a way that queen-right bees simply don’t. There is virtually no drifting from these nucs. With luck it will be at least another fourteen days before the queens are mated and laying.

By then all the original brood will have hatched along with the mites. We have seen it suggested that the brood should be destroyed in order to kill the mites but this is neither necessary nor desirable. Varroa mites are  to some extent cannibalistic which might explain the reduction in viable mites but, whatever the reason, we have found that these new colonies are nearly always the best ones the following year, with young queens and a minimum of mites.

There are a number of variations of this plan. You would want to vary it if you intended to go to the heather – maybe by uniting the new colonies with the parent. If you couldn’t get round all the yards to remove the brood you might consider an annual re-queen in late summer. Whatever variation, you are endeavouring to get the hives a break in brood rearing and it will be to their benefit if you can make it long enough for all the brood to hatch.

← Back to blog index

We'll be online this year for the National Honey Show's virtual trade exhibition. Pease do take a look at our video below.

KBS at the National Honey Show